Salt-n-Pepa is an American hip hop trio from Queens, New York. The group, consisting of Cheryl "Salt" James, Sandra "Pepa" Denton, and originally Latoya Hanson who was replaced by Deidra Roper as "DJ Spinderella", was formed in 1985 and was one of the first all-female hip hop groups. Salt-n-Pepa changed the look of hip hop with their scanty, sexy clothing and their willingness to talk about sex and their thoughts about men.

The group entered the music industry at a time when hip hop music was believed to be a fad and major record companies were reluctant to sign hip hop artists. Originally calling themselves Super Nature on their first single, James and Denton made their debut in 1985 with the single "The Showstopper". After the success of the single, the group changed their name to Salt-n-Pepa and signed to the independent Next Plateau Records to release their debut album, Hot, Cool & Vicious, in 1986. The album was produced entirely by Hurby "Luv Bug" Azor, Salt's boyfriend at the time and also the group's manager. The group would later have legal issues with Azor after they accused him of paying unfair royalties. Hot, Cool & Vicious was nominated for a Grammy Award, and the strength of the single "Push It" helped the album sell over one million copies.

Their second album, A Salt with a Deadly Pepa in 1988, sold moderately well, but their next two albums, Blacks' Magic in 1990 and Very Necessary in 1993, sold 1.6 million and 7 million copies respectively. The latter contained the single "None of Your Business", which won the Grammy Award for Best Rap Performance in 1995. Salt-n-Pepa's fifth album, Brand New, released in 1997, received a lack of promotion from their record label and only sold approximately 700,000 copies. In 2002, Salt decided that she had had enough of the music industry, and quit the Salt-n-Pepa, resulting in the disbandment of the group. The group officially reformed five years later, but they are yet to release another studio album. 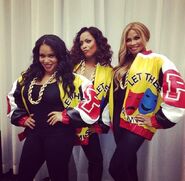 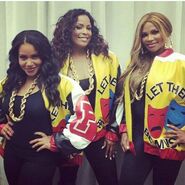 Add a photo to this gallery
Retrieved from "https://hip-hop-music.fandom.com/wiki/Salt-n-Pepa?oldid=14734"
Community content is available under CC-BY-SA unless otherwise noted.